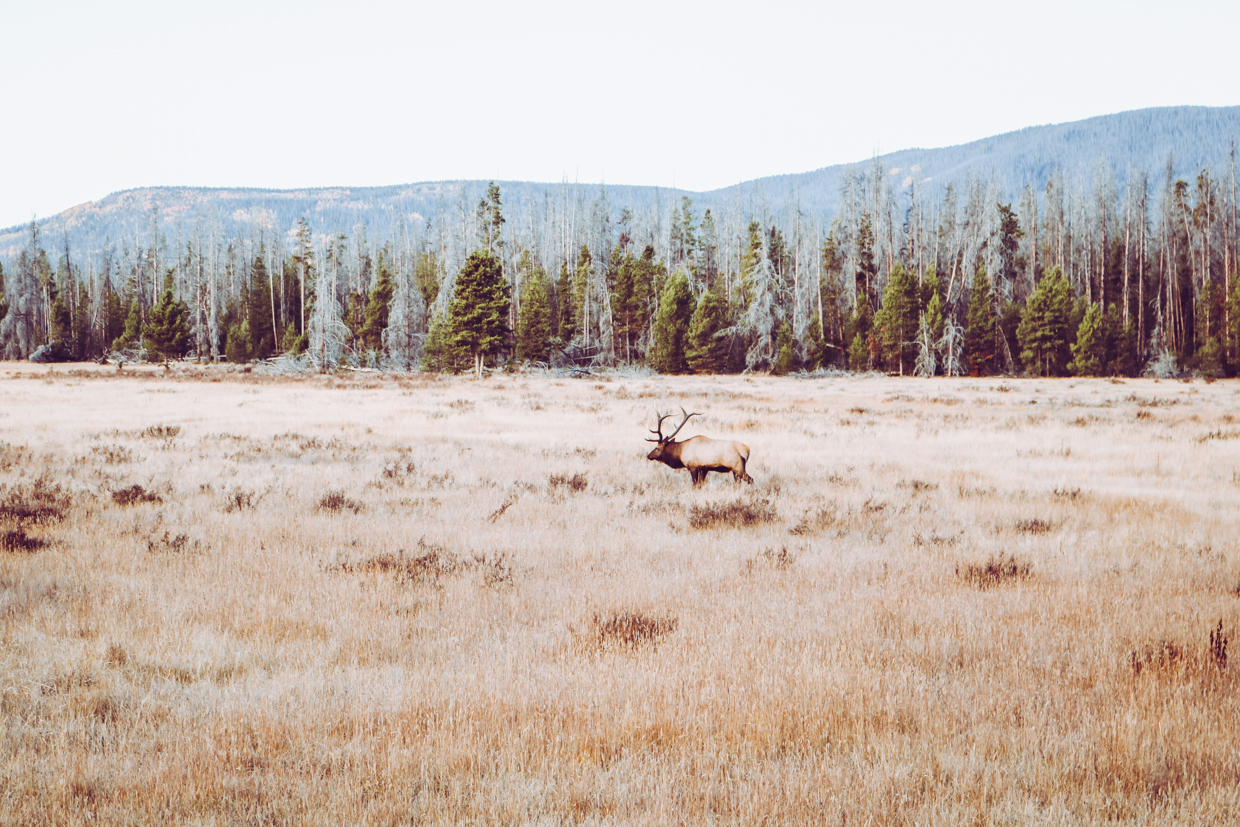 Preparing for the Hunt

After three years of preparation, I set out on my first Colorado over-the-counter elk hunt in September of 2018. The plan was to arrive two days before my hunt start day, then hunt for four days before heading back home.

To prepare for this hunt, I spent hours listening to elk hunting podcasts, watching elk hunting videos, and learning everything I could from my Elk 101 membership. I decided to go for the archery season, identified which over-the-counter unit I wanted to hunt, purchased all of my gear, upgraded my bow, and set out on the drive from Kansas City to Colorado. Note…don’t worry, if you’re wondering about the details for all of this preparation, I’ll be sharing more in-depth posts over the coming weeks about each of these areas.

We arrived in Colorado two days before the start of my hunt to give us time to set up camp and scout out the area. I was somewhat familiar with the area but wanted to get my bearings for my entry point, etc. For this first hunting trip, we opted to set up our base camp at a nearby public campground. There are pros and cons to base camp locations, which we’ll get into later with another blog post.

On day one of my hunt, the first thing I wanted to do was locate the areas I had identified during my e-scouting. During my preparation, I used onX Hunt and Google Earth to look for specific areas within the unit where I thought I would see signs of elk. I also wanted to see if I had been e-scouting correctly.

A few areas I specifically wanted to look for that I had marked on my onX Hunt map and viewed in Google Earth were:

I quickly located both the wallow area and the water source. I also noticed a lot of elk sign in this area. It felt good to know that my e-scouting was paying off! I decided to sit in this area for about twenty (20) minutes. At this time I hadn’t bugled at all, and I was 4-5 hours into my hunt. To be honest, I think I might have been a little nervous to put out that first elk bugle call!

So, I decided to bugle, and immediately a bull elk bugled back. At this point, I was PUMPED, and the adrenaline was flowing. I bugled again, and the bull elk went crazy, bugling, chuckling, and being very vocal. I wasn’t sure what to do next; it’s like all of my research left my brain in the excitement. The bull elk wasn’t coming in, and I thought maybe he had a few cows with him.

I decided to walk up and around the meadow and continued to call the entire time. The bull elk both bugled and chuckled in return. I made it to the edge of another meadow and decided to stop and call again. When the bull elk responded, it sounded like he was going around the meadow and I thought there was no way he was going to walk directly into an open meadow. The wind was blowing directly at me; I predicted he would go around me and end up behind me, so I backed up 20 yards and called out another bugle. The bull elk ran out and stood directly in the middle of the meadow, and he was a MONSTER.

Here’s where my mistake came back to bite me. Had I sat still and kept calling, he would have only been 20 yards away from me. But, because I assumed that he would go around me instead of walking directly into the open meadow, he was now 40 yards away from me with no shooting lane. Talk about a heart breaker! There was no shot, and he ended up walking off with two cows. I tried calling him back in but no luck.

After that day one excitement, I decided to call it a day and return to base camp.

Day two started around 6:00 am, and I climbed up to where I had called in the bull elk the day before. I jumped right in and gave out a bugle call, and a reply came from behind me. I decided to climb up to higher elevation and sat down in an attempt to get in front and above him.

While sitting there, I was watching two moose when I saw a bull elk coming down an elk trail. I decided to go up and out in front of where he was to see if I could call him up to me. I was about 100 yards away from his location and put out two cow calls. He immediately responded and began walking up the hill towards me. When he reached about 50 yards from my location, I could see that he was a nice 4×5 and pulled back my bow to wait for an open shot. I had my bow at full draw for what seemed like forever. I assumed he would have stopped before he got much closer, but he kept walking towards me until he was about 8 yards away.

I released my shot and hit him; at first glance, I thought I had hit him in the lungs. He turned and ran down the mountain. It sounded like a truck driving through a forest; it was so loud. I heard him crash and waited out approaching him.

But, here’s where my nerves and excitement got the best of me. I gave him ten minutes before approaching, which in hindsight was not nearly enough time. I walked down towards him and saw a huge blood trail. I then saw the bull elk laying up against a log and I thought for sure he was down. As I walked up closer to him, he jumped up and ran. I followed him until the blood trail ran out and there was no sight of him. I decided to stop looking for him to avoid jumping him again and come back the next day to look for him again.

I returned to look for the bull elk on day three, starting at 6 am again. I walked up the mountain to where I lost the blood trail and began looking up and down the mountainside for six hours. I covered almost 10 miles going back and forth, up and down, but was never able to find him or any blood sign again.

To say it was disheartening would even begin to touch how I felt in this moment. As an ethical hunter, I never want to wound an animal and not find and process it ethically. So many lessons learned during this process that I will keep with me as I continue my elk hunting journey.

I looked until my legs couldn’t take me any further and had to end up heading back to base camp without locating the bull elk. After that day, and after hunting solo for three days at 10K plus elevation, I decided to end my hunt here and spend day four processing my first Colorado over-the-counter elk hunting trip.

My 2018 Colorado over-the-counter elk hunt had its share of highs and lows, but overall it was an amazing learning experience. To go from thinking elk hunting was not even in the realm of possibility without a high dollar outfitter, to successfully call in not one but two monster bull elk during my first hunt, was an amazing experience. I’m going to take the lessons learned during this trip, and head back to the mountains of Colorado in 2019 for another over-the-counter archery elk hunt.

The following are affiliate links. We are a participant in the Amazon Services LLC Associate Program, an affiliate advertising program designed to provide a means for us to earn fees by linking to Amazon.com and affiliated sites.

Thank you so much for being a part of Primal Pioneer. 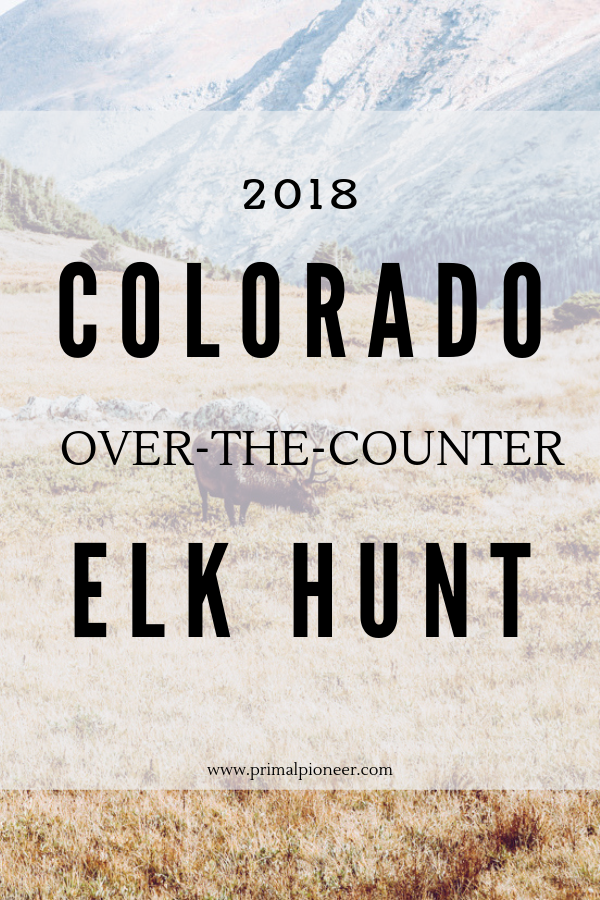 Primal Pioneer is a food blog and public land hunting resource by Mike and Jennifer Shreckengost. We’re a husband and wife team who combined their two passions – a love of the outdoors and food – into a joint effort with Primal Pioneer! You’ll find resources on planning and executing your own DIY over-the-counter public land big game hunt, along with wild game recipes featuring mostly venison and elk.

This site uses Akismet to reduce spam. Learn how your comment data is processed.